Almost three years ago to the day I put a page up on the Sunday Assembly site that said: “Start Your Own Sunday Assembly”. Sunday Assembly London had launched 10 days before and it somehow led to a flurry of publicity from global media. Emails poured in from across the planet asking if we could start a Sunday Assembly near them. It was a big moment: would we concentrate on home base? Or try to help people all over the world?

The received wisdom, and most of the advice we received, was that we should not try to grow until Sunday Assembly London was locked down. Until the system had been figured out, impact had been shown and a pretty bow tied everything up.

That’s how social innovation is meant to look: 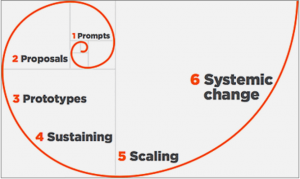 You look at some ideas.
You propose different solutions.
You try out different ideas.
You get sustainable.
You scale

But we decided to do steps 1-5 all at the same time, we decided to go global. If people wanted to start a Sunday Assembly then we should help them after all TED had created TEDx and that seemed to work. This isn’t pure craziness btw but was inspired by Paul Graham’s dictum A Startup = Growth.

“A startup is a company designed to grow fast. Being newly founded does not in itself make a company a startup. Nor is it necessary for a startup to work on technology, or take venture funding, or have some sort of “exit.” The only essential thing is growth. Everything else we associate with startups follows from growth.”

Opening multiple chapters across the world would allow us to learn, experiment and know more quicker than we could through prototyping so we decided to go for it.

The Most Glorious Experiment

And going for it has been the most glorious experiment that we could possibly have done. There are now 69 chapters in 8 countries with thousands of people building communities. In Los Angeles they have raised enough money to hire a full time member of staff, just as in London there is now a full time member of staff. Thousands of people coming to the site wanting to have a Sunday Assembly in their town.

However, I would not write a blogpost about changes to the system if everything was perfect: sadly, not all Sunday Assembly chapters do survive. Sunday Assembly New York recently shut its doors as did Sunday Assembly Toronto – these are not the only chapters not to have made it :: pour one out for our fallen homies::. Even successful Sunday Assembly communities have regular stories of burnout of volunteers. We do not want to build an organisation on burn out.

The second issue is that we still have SO MUCH INTEREST. This is obviously a great ‘problem’. People really love what we do and want to do it near them. The issue is that at present we can’t keep up with the demand, in part because we wanted to make it as easy as possible to start chapters so didn’t charge people a dime for anything. This was the best of intentions but didn’t have the best of results.

With that in mind we have thought a lot about new ways to launch chapters to make sure that they are stronger, more sustainable and contain legions of smiling collaborators.

The key to that, we believe, is providing more training to new organisers and us spending more time making sure that we have the best possible teams.

Each organising team will have to come on training to be able to launch a Sunday Assembly (which they will have to pay for).
We will put more time in selecting the organisers.

This is all with one goal – to create really strong healthy organising teams that will lead to really happy, healthy and strong Sunday Assembly chapters.

By raising the barrier to entry, adding more costs, and more selection, it probably means that we’ll grow a bit slower, however, we also think it will mean fewer organisers who suffer by putting more and more in, without getting more and more out.

Putting the brakes on is a bit nerve wracking when previously we had been following Paul Graham’s startup = growth model. But I take strength from observations that Scott Heiferman, founder of Meet Up, made at the ‘How We Gather’ in Harvard in November where he recounted the huge decision when Meet Up started charging people to create events.

Charging meant all of a sudden the entire economics of the business changed. Overnight Meet Up lost 90% of their organisers. A company that had been measuring numbers of organising members suddenly lost their base. The difference came further down the line: the sustainability of Meet Up was assured. Now the more organisers they had, the more sustainable they became (btw this doesn’t mean we want to lose people but we do want to support them as well as we can).

Is there a technical name for the change we’ve made? Yes there is (get ready for some RED HOT BIZNIZ CHAT.XXX). He made a…wait for it…business architecture pivot. Wow! What on earth is that? It’s from Eric Ries’ Lean Start Up when he describes the way that organisations can change direction and emphasis.

A Sunday Assembly chapter is a complex system. The longer the we build them the more we realise that anyone wanting to start a chapter is making a serious commitment of time, energy and resources. Exactly how we’re making those changes will be made clear in a follow up blogpost to this one where we’ll explain what that means in a more concrete way.

Here’s to fantastic New Years for all organisers, Sunday Assembly chapters and the people that dwell therein. We’re going to continue to work, with you, as hard as we can to create a world where everyone lives life as fully as possible.

Many Assemblies around the world are celebrating their Birthdays this month, and Sunday Assembly Los Angeles are treating us to a guest […]

At the start of the week, I sent an email out explaining why we are raising money. It went like this: “Hello […]

My dear friends, particularly across the USA, it seems that things might not turn out how you thought. For many this is […]

Last week I was invited down to Brighton to give a talk at TEDx Brighton. It was the first time I’ve spoken […]