Last Sunday in the Conway Hall we had the first ever Sunday Assembly London Vision Day – it was exciting. We outlined the vision for where we wanted to go, and launched our first regular giving scheme. That way anyone from the community could support us financially so that we could make it a reality.

Why did we do this? Well, as always we start from first principles. Everything that we have ever done in Sunday Assembly is down to one thing: we are incredibly grateful to be alive humans. The Sunday Assembly is a celebration of life, our mission is to help everyone live life as fully as possible and we are obsessed with that goal.

We are obsessed with trying to help you – yes, YOU! – to live your life as fully as possible.

But not just you. No it does not even just mean everyone who is in the room at a Sunday Assembly gathering. We want to build that joyful world where everyone, young or old, poor or rich, north or south, up or down lives life as fully as possible.

It is a bold, daring, reckless, lunatic mission that started here in London. That is the vision that we presented at Sunday Assembly London last Sunday at our Vision Day. It’s a big vision, which needs a long blogpost because we really want to lay it out for you in one place. We really want you to give us the 10 minutes it will take to read.

So the blogpost is long, it is important, but, don’t worry, we’ll keep it lively with some well chosen gifs:

Our big bold vision for London seems nuts but what makes us think that we can achieve it is looking at what we have achieved so far.

Sunday Assembly London, and the entire movement, started with two people having a conversation in a car, when Pippa and I realised we both wanted to do something a bit like church, but just without the religious bit.

But that’s become too small and we think we will shortly have to have two meetings one in the morning, and one in the afternoon (bring your hangovers to Sunday Assembly!): 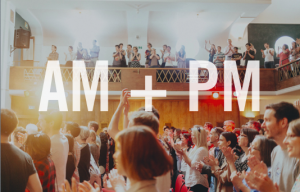 If we are able to carry on we could easily imagine doing that once a week.

This was only able to happen because more and more people got involved. We want you to get involved, get inspired and get behind this vision.

This growth is seen all over the community. Indeed it is totally driven by an amazing community of excellent people all pulling together to create a new future for themselves and the people round them.

These two excellent people below turned them into Live Better Groups which have had over almost 200 people through them.

The impact of this activity is profound. Our social impact survey (constructed with the help of Steve Coles at Intentionality, Josh Bullock, PhD Kingston Universtiy, Michael Plant, PhD Student Oxford University) have shown:

We have seen similar increase in people with report mental health problems of:

The work was great but we got the feedback that people wanted something more. So we have now turned designed and run the first prototype of a Life Course. 8 sessions over 8 weeks that combines the evidence based work from Martin Seligman’s P.E.R.M.A. model of positive psychology with the excellent meeting structure of the Alpha Course. We’re just processing the data from the first run but the reports back have been phenomenal.

Why Are We Doing This?

Because the problems we are facing are VERY BLOODY REAL. This is where I get serious. Or, rather, I show this graph which shows how very bloody serious the situation is. 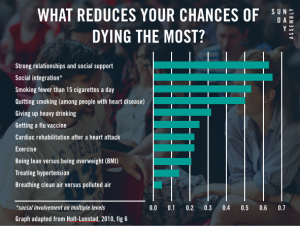 Well, we’ve had so much feedback from so many people and these are just some of the ideas that have come to us….

Why are we confident that we can make a difference?

Well, it’s not just because we’ve done so well so far. It’s also because we are basing our work on an excellent model. The congregational community – pioneered by mosques, synagogues, churches, temples and so many more – is one of the most effective ways of building communities that change people, transform towns and spawn movement.

Learning from religions has been effective in the past: In 1976 a guy called John Kabatt Zinn thought that using vipasana meditation could help the patients who were suffering from pain in his hospital. He was a doctor and an excellent buddhist practitioner who knew he couldn’t make them become buddhists so found another way to teach them. He:

Thus he created mindfulness which you can find in the NHS, board rooms, your smart phones and a ton of other places.

We are now looking at congregations and want to do the same thing: 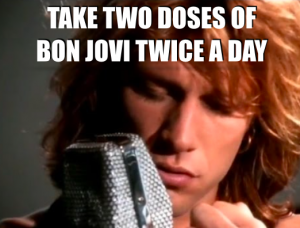 These systems help to transform people’s lives, transform the communities around them and launch movements that can change the world.

We hope the answer is:

Yes I do want to be part of that. That sounds awesome.

That’s lucky because we need you.

The congregational community model is built around creating connections that unleash the human being’s inner desire to help. Taking people out of the fight or flight mode helps to promote kindness, altruism and compassion. All of these systems are build around human commitment to that ideal.

It is probably time to put this quote in: 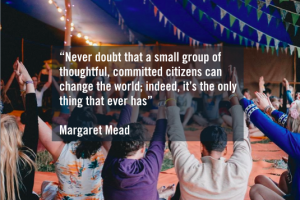 Do we want to be part of that group?

It’s a pretty great group (but that doesn’t mean we don’t like other groups, alright?).

1. We need you to commit to trying to live your life as fully as possible.

We will never achieve our goal unless you turn that from an interest to a commitment.

2. We need you to commit to giving your time and skills to Sunday Assembly.

3. We need you to commit to financially to supporting Sunday Assembly.

The success of the congregational community across the world is built on members of that community giving to the vision.

By achieving all three of these things we believe we will be able to profoundly change the world.

This is the first time in Sunday Assembly London that we have asked for regular financial support from you. 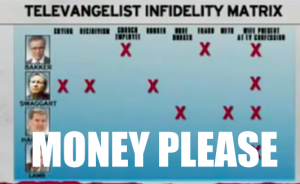 I didn’t realise that most vicars, imams and rabbis are just great people trying to help their community.

This is partly because I had never really gone to a fun congregation and understood that they rely 100% on donations from attendees.

3) In London we had the vision. Not the team. 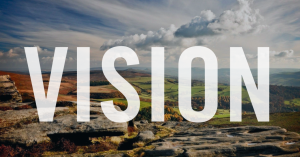 But Where Will It Go?

£5K a month we could retain a full- time staff member, provide a space for rehearsals, interest groups, our courses and be confident about putting new programmes in place.

£10K and we could have larger spaces, more training, residential weekends, sustainable support for members of the community struggling with their mental health and liaison with local authorities about supporting those in need.

£20K we could move into transport assistance, a dedicated SA building, and an expanded outreach programme that includes prisons and schools.

(All of our spending will be public and transparent as we are an official charity and this is our charity number – 1162995).

So you want to give regularly: the question is how much?

Well, in congregational communities it works in different ways in different places. Jesus Christ (bearded, robed, Son of God etc) told the a widow that her mite (a Jerusalem penny) was worth more than the millions a rich man put in because she was very poor and it was all that she could afford.

In churches today there are some that tithe, which means they give 10% of their gross income. That seems like A LOT but it does mean that churches can do a lot of things.

We want you to be involved in Sunday Assembly in a myriad of ways, doing a myriad of things, improving your life and the world of those around. So instead of thinking in percent, maybe think of time.

An average salary in London is £25k. So one of hour work is £12.50 after tax, it would change depending on your wages (that’s how sums work). Let’s have a look at how that would break down….

Can you give one hour a week of your pay?

Maybe you think that because you’re not yet taking part in all of those activities then you shouldn’t give that much. Well, we are already putting on a Sunday Assembly every two weeks.

Can you give two hours a month of your pay?

Then again, you only go once a month for an hour of uplifting life-affirming magic but haven’t yet got into the community section, you haven’t yet seen had it change your life.

Can you give one hour a month of your pay?

Maybe, the place you’re at right now it means that Before we head off, I’d just to ask one more question….

What Does Your Bank Statement Say About You?

This was a question that Richard Spens asked me when we were working in a co-working office called Tent. He said, if you look at your bank account it is a good reflection of what is important to you in your life.

Getting to work = likewise important.

Food so you can stay alive = bloody important.

Food so your children can stay alive = also bloody important.

If these are important maybe it should be reflected your bank statement too.

Whatever you want to give, this link here will enable you to do just that.

Thanks so much for getting to the end of an amazingly long internet post. You are great.

ps. As a reward for getting to the end of a long blogpost here’s a bonus panda gif.

The Sunday Assembly is at a bit of a bottleneck at the moment. There are literally hundreds of people who’ve got in […]

Community member Nicole Holgate, on our 5th Birthday gathering… Last week I lay awake at 3am thinking about what the future of […]

Just a quick note to say thank you SO MUCH for following The Sunday Assembly. You might be reading this because you […]

Forums are open again. We’ve added signup and login forms to all forum pages in the right hand sidebar so just get […]