At Sunday Assembly Towers we are really looking forward to our new event Retreat To The Future – a two day urban retreat dedicated to unleashing personal growth and building community connections – and we hope you are too.

We’ve been planning it for months now but…..it does seem a bit incongruous to launch this new joyful experience when the political atmosphere seems so febrile. So tense.

It brought to mind a sequence in the Adam Curtis documentary Hypernormalisation (link for UK readers), where the British director chronicles the retreat from the political activism of the ‘70s to the work out culture of the ‘80s.

“Jane Fonda gave up socialism and started another revolution. Trying to change the world was too complicated. But there was still one thing you could control. Your body” – Adam Curtis

How can we justify perfecting ourselves when we live in an imperfect world? How can personal growth create a world where everyone lives life as fully as possible?

The answer to that question is that creating personal change is fundamentally different when it is done in community. Churches, mosques, synagogues and temples have been working like this for years. They see that personal growth and societal growth are intrinsically linked.

Indeed, the only way that we are going to be able to tackle the sorts of problems that we face in the 21st century is by radically changing how we look at ourselves and the world (the philosopher Jonathan Rowson wrote a great article about just this thing).

Retreat To The Future

That’s why we would love you to come to the first ever Retreat To The Future, which will be running in London on March 11th and March 12th. It will be an event that both hums and dings (ie. a humdinger) combining a structured personal development pathway, with creative, uplifting, joyous activities including singing, mindfulness, movement and play.

Rumi, the much quoted 13th century Sufi poet once said:

“Yesterday I was clever, so I wanted to change the world. Today I am wise, so I am changing myself”.

At Sunday Assembly we believe that you can be clever and try to change the world by being wise and changing yourself. 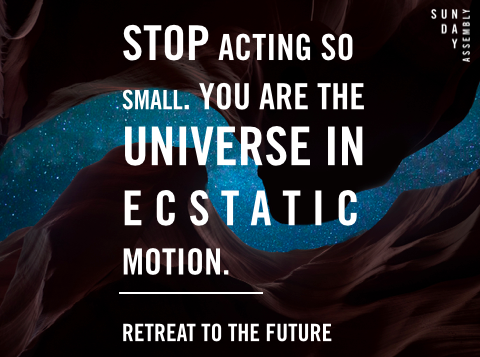 What? An Easter service in an atheist church, that doesn’t seem right? Don’t worry, we’re as rational as they come but let’s […]

Almost three years ago to the day I put a page up on the Sunday Assembly site that said: “Start Your Own […]

September 28th is going to be a big day because, across the world, there will be new Assemblies launching. We don’t yet […]